Leah Donovan awoke to the rhythmic sound of rain drops hitting her bedroom window. She really didn’t want to get up. The bed felt so good, but she had to get ready for work.

When she turned on the water in the shower, it was cold and remained that way. She quickly jumped in, washed, then jumped out. After she got dressed, she went to put on her shoes, but one of the heels had begun to separate. She went to grab a quick breakfast of toast and juice, but the bread was molded and there was no juice. 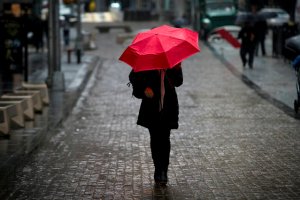 Leah felt like she just wasn’t having any luck. She grabbed her wallet, keys, and cell phone. Once outside, she was bombarded with raindrops. She doubled back for her red umbrella.

As Leah walked the three blocks to the bus stop, the rain stopped. Rays of sun tried their best to break through the clouds before them. She closed the red umbrella hoping it would not be needed anytime soon.

Leah stood at the bus stop with the others she saw most mornings. No one seemed to speak – just nod a greeting and proceed with whatever they were doing. Her cell phone buzzed.

Leah’s eyes grew large. She never liked standing in front of groups, especially when she had not prepared for whatever she was supposed to speak about. She started typing an excuse for why she couldn’t do it, then erased it.

Leah felt ill in a way, nervous really. She checked her email. Jim’s presentation was there. She clicked on the file. Scrolling through the slides there was much that she was not familiar with. A second email came in. It was notes. Thank God!

Leah got on the bus and swiped her pass while fully immersed in the content of her unexpected task. She sat on one of the side benches, laying down her umbrella and wallet as her eyes stayed glued to her cell phone.   When her stop came up, she rose from her seat still studying the presentation while managing to grab her wallet without looking. She descended the bus stairs and off to work.

Once there, Leah had to hustle to make sure everything for the presentation was set up and ready. She mimicked a dry run as she sat in her cube and then reviewed Jim’s notes again. Even after all of that, she still felt ill-prepared. Her hands were sweaty and her stomach felt on the verge of lurching. She hated being put on the spot, but this was for Jim. He’d mentored her since she joined the company over two years ago. And he had been there when her sister passed away.

Then it dawned on her. Leah looked at her desk and didn’t see the umbrella. She started to panic. Where is it? She scrounged around the drawers in her cube then tried retracing her steps. It hit her. She left it on the bus. She started to cry. It was all she had left of her. Leah tried to collect herself. The presentation was in five minutes, and in this moment, it didn’t matter compared to what she had lost – again.

She frantically looked up the name of the bus company and called. They didn’t offer much help, just a “check back tomorrow to see if it turns up in our lost and found”.

Leah felt like she couldn’t function. Her mind was stuck on the red umbrella and her sister. Her co-worker broke her glazed stare by reminding her about the presentation.

Leah completed the presentation successfully and had received a few pats on the back from her peers. The distraction of the umbrella had obviously cured her stage fright. But now she was on a mission. She devoted her lunch break to finding the symbolic link to her deceased sister.

Two stops down from where Leah got off the bus earlier, a casually-dressed man climbed aboard and took a seat. When he noticed the red umbrella setting alone on one of the side benches, he asked if anyone had lost it. No one claimed it, so he took it. After all, rain was in the forecast for the afternoon.

The man exited the bus, then walked a couple of blocks to a café to meet a friend for coffee. When he sat down at the table, he placed the umbrella in the chair next to him. The friend arrived and the two shared conversation over hot drinks and pastries. Afterwards, the man paid the check and left. The waitress did not notice the umbrella until after the man and his friend had left and she was clearing the table. She placed it in the lost and found in case he came back.

That afternoon, it started to rain again. The waitress had no covering so she took the umbrella from the lost and found. By the time she got to the bus stop, the rain had subsided. She wrapped the umbrella up in itself and set it next to her. She spent the ride looking at the people and buildings that she passed by. The waitress thought she saw her boyfriend in an embrace with another woman. She got off at the next stop, hurrying past the boarding passengers to get to the place where the infidelity was taking place. The red umbrella was once again left behind.

Nathan sat down, looking back at the chaos that was developing between the former passenger and the couple on the street. He shook his head in disbelief as the two women began fighting while the man walked away.   Women!

He turned back around to nonchalantly view the road ahead. Then he took notice of the other passengers. His eyes happened to catch something red in the corner of the back seat. He went back to investigate. It was a red umbrella. Nathan gasped. Some of the passengers turned to look at him.   He nodded his head signaling that everything was ok, but internally he knew that something supernatural was happening.  He picked it up, staring at it, wondering what significance it held.

Nathan got off at the next stop. He found a woman sitting alone on a bench, crying. Remembering what the angel had mentioned, he knew that this was the person he was to help. He placed a hand on her shoulder, “Are you ok?”

The woman looked up at him. Then she saw the umbrella. Her sorrow turned to joy. “My umbrella!”

“I think that’s my umbrella. Can I see the handle?”

“Well, um, here you go.” Nathan handed Leah the umbrella. Sure enough ‘MAROO’, her sister’s nickname, was scratched into the handle.

“I left it on the bus this morning. I thought it was gone forever.” Leah uttered with excitement and relief.

Nathan was puzzled because he thought the deed he was to do would be greater.  “I’m glad you were able to get it back. Hope you have a nice day.” He turned to walk away.

“Hey, wait a minute. Can I buy you lunch or something? After all, you did just save my day.” Leah smiled.

Nathan and Leah walked a couple of blocks to one of her favorite spots. Over sandwiches and iced tea, Leah hesitantly began her story, detailing the significance of the umbrella. “My sister Maroo…um, Marie, died a couple of years ago.”

Leah continued feeling somewhat comfortable with the man across from her, “It was during one of the bad snow storms. Marie’d left for work, but never arrived. It was unlike her to miss work. She loved her job.”

“Three days later, they found her car over a hidden embankment. Snow had covered it, but this red umbrella was sticking out of one of the windows. That’s how the rescue team found her.” Leah tried to choke back tears, but some fell.

Nathan placed his hand on hers offering a proverbial shoulder of comfort.

“So I kept this umbrella as a reminder of my sister and her last act alive.”

“Me too.” Leah collected herself then smiled. Nathan smiled back. There was a brief pause before they averted each other’s eyes.

Leah changed the subject. As they continued to talk, they found more topics to talk about – some being utterly hilarious. Like the Google commercial about Hall and Oates. She was enjoying Nathan’s company, and he seemed to feel the same. Before they knew it they had been at the restaurant close to two hours. The new-found-friends exchanged numbers and hugged as they were about to part ways. Leah ensured that she still had the umbrella in her possession.

This would be her lucky day after all – and for Nathan too.

2 thoughts on “Just My Luck”