Ever have a great scene in your head, but when you write it all down, it seems flat?  I’ve certainly been there.  It can be frustrating to visualize everything, and even come up with a bunch of eloquent words that do absolutely nothing for the story.

A writer can show and tell all they want.  But when a story feels dull, chances are the book will be placed on a shelf or table to collect dust.  I certainly don’t want that.  So I enlisted the trusty assistance of Google to help me figure out how to improve my scene.

Lucky enough, I found an infographic by Ryan Rivard based on John August’s post on how to write a scene.   Below are the 11 steps writers should consider for developing the perfect scene. 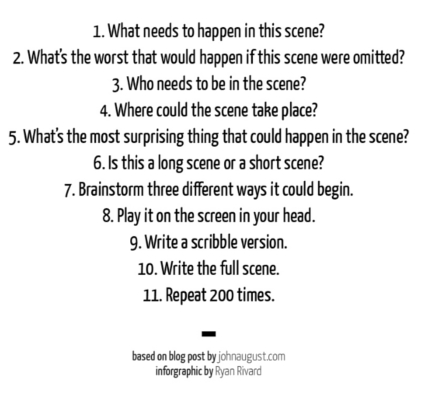 For my story the scene could not be omitted.  It is a pivotal point that shows more depth into who the protagonist is and the effects of past events on her psyche.  Sure I want everyone to understand how disappointed, embittered, and depressed the protagonist got after a failed family reconciliation.  However, sometimes showing or telling the details isn’t enough.  Or at least for me, it didn’t give the scene any oomph.

And of course, giving a lot of details about background items like wallpaper, type of furniture, smells in the air and so forth set the scene, but still don’t give it that pop.

That’s when I realized what was missing – the element of surprise.  It’s that curve ball or unexpected thing that catches the reader off guard, but keeps them intrigued. In fact, as I wrote it I felt goosebumps.  I’d love to tell you what it is, but you’ll have to wait for the book. 🙂

Another post I found interesting is by K.M. Pohlkamp about the lack of excitement in writing a scene. Her main point, “if you’re not excited to write it, they won’t be excited to read it” is so true.  That’s when it may be worth going back to the 11 steps above to figure out how to fix the blah.

Then again, sometimes writers are on deadlines (personal or professional) or trying to stick to the often encouraged rule of writing, “write something everyday”.  And I get why it’s promoted – so that writers won’t lose their mojo, increase productivity, and facilitate improvement.  But I wonder if it’s a good idea to force writing if one is not in the mood.  That will come across in the story too, right?

Either way, there’s always editing and the 11 steps to guide us through.

7 thoughts on “11 Steps for #Writing the Perfect Scene”