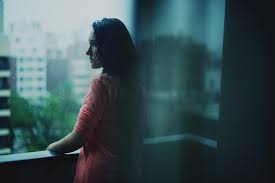 Julie Schumacher peeped one eye open as she picked up her cell phone to turn the alarm off.  It was 7am. She didn’t see much point of getting up since she had nowhere to be. She rolled back over, pulling the covers over her head, trying to catch a few more winks.

Since being laid off, Julie found it almost irrelevant to get out of bed most mornings. Most days were spent submitting resumes online, hobnobbing with former co-workers who’d moved on, and making cold calls in hopes that something would come through. But there was nothing. Disappointment and depression were setting in.

Julie placed a pillow over her head to block out the hustle and bustle of city life going on outside her apartment building. Then almost like a Tom and Jerry cartoon, a smell wafted into Julie’s apartment. It was the smell of fresh bread baking.  She tried to ignore it, but Zekman’s breads and pastries were the best in town. She loved the smell, and even more the taste of the apple strudel with light icing.  Oh, how she’d love one of those. But right now she couldn’t afford luxuries.

Instead Julie hmphed as she got out of bed, grabbing her pink terry robe on the way to the kitchen. She filled a bowl with cereal and milk, then went out on the fire escape to eat and observe the morning events.

Her eyes set straight ahead on the horizon. Dawn was just breaking.  The sun had yielded its colors of red and orange with an underlying blue.  Julie felt thankful for witnessing the arrival of another day. But her thankfulness turned to anger as a series of cars honked their horns at each other. The culprit causing the noisy melee

was a reddish golden retriever who couldn’t figure out which direction it wanted to go. Finally a passerby lured the dog towards him with some type of food. The crisis was averted and traffic was restored.

But a new one arose as a small child tried to pet the dog as a woman pulled at her to continue moving. The little girl began crying then wailing. Julie noticed the little girl had on a navy and green plaid jumper with a white shirt and socks. She assumed it was a mother with her daughter on the way to the school several blocks down.

Julie took a few bites of her cereal. She remembered that school. It was her school long ago. She wondered if the little girl’s path would pan out like hers. She hoped it would be better.

The owners of the makeshift booths on the corner were setting up for the day. Julie wished someone would shut them down. The items they sold were either fake or didn’t do what they should do. Like the black handbag that she thought was a top designer. When she looked at the label closely, the name was spelled differently. She was willing to overlook that, but couldn’t when the bottom fell out. Getting her money back was like trying to pull the tooth of a hungry lion. The handbag ended up in the dumpster.

Julie chuckled. She recalled the “Dumpster Boys”.  A name she secretly gave to a group of 4 or 5 homeless men who stayed in the alley next to her apartment. When she’d walk home from work some would be sleeping while others wandered out onto the sidewalk begging for change. She’s encountered them on occasion, giving what she could or dropping off some food or water. Now that she’s unemployed, she wondered if her fate would be the same. She had some savings, but that will last but for so long.

She took another bite of her cereal. This time looking down pondering how close she was getting to her last meal. Julie heard arguing. She looked below to see a couple walking away from her building. She recognized them, but didn’t know their names. They’re usually lovey-dovey, or at least that’s how they were on most occasions, but today something was obviously wrong.

Julie started to feel sad. She wanted to be with someone even if it was to argue. Dating right now wouldn’t be a good thing. She had too much on her plate trying to survive without employment. 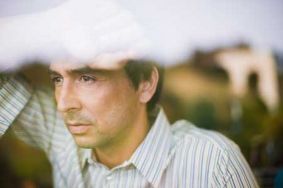 But almost as if her thoughts had been read, Julie looked up to see a handsome man watching her from a building across the street. He waved. She hesitantly waved back. She tried to look away, but when her gaze returned, he was still looking – this time smiling. He made a motion like drinking from a cup and saucer then pointed down. He followed the gesture of a shrug as if asking a question. Julie could only assume that he was asking her to meet for coffee. She wasn’t sure if she should. Then again, what did she have to lose?

She quickly dressed in jeans and a black floral top.  She thought about putting her hair in a bun, but opted to comb through the kinks instead  Julie felt excited about the prospect, but started to second guess herself again, wondering if it was too much of a snap decision.  It was just coffee, so she went about her way.

On the sidewalk in front of her building was the handsome man.

“Do you want to go to Zekman’s for some coffee and fresh rolls?”

In her head, Julie was doing back flips.  My how she craved the strudel, but she didn’t want to be rude.  She’d get a roll instead unless Mark left the decision open.

“Sure, they have the best baked goods.”

Julie and Mark began walking in the direction of Zekman’s.

“It’s one of the reasons I moved into the neighborhood.”

“Yeah, my dad used to work the graveyard shift at the old steel mill when I was growing up.  He’d bring home fresh rolls sometimes.  I loved the smell.”

Julie thought Mark’s story was cute, but then again a little off that a grown man would move to a place based off of breads and pastries.  She tried to sequester her judgement so that she wasn’t ruling out yet another guy because of something that was odd to her.  “So where is your family now?”

“My mom and dad retired and moved to the south.”

Mark opened the door to Zekman’s and allowed Julie to enter before him.  She was making a mental check mark in her head noting that he had done something right.

They walked up to the counter.  Julie hesitated.  She had her wallet, but didn’t have enough money to buy her usual order of 2 apple strudels and a large coffee.  She decided to hold back and let Mark order first.  He did, then asked her to place her order – he was buying.  Thank goodness!  She made yet another check mark in her head.  He was on a roll.  She went for the apple strudel with light icing and a cup of coffee. 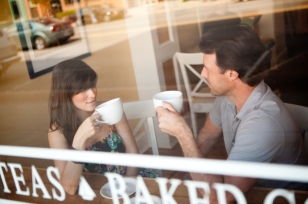 The pair took a seat at a small table near the big picture window.  Julie wasn’t sure what to talk about.  She looked out hoping for inspiration.  Luckily, Mark filled the silence.

“Well, I used to be an office manager.”

Julie felt embarrassed and didn’t want to come across like a loser.  “I was laid off a few months ago.”

“Sorry to hear that.  How’s the job hunt been?”

“Just one slammed door after another. It’s really frustrating and disappointing.”

“Are you looking to do the same thing?”

“I’d like to, but open to try something different if the opportunity presents itself.”

“Well, I may have something up your alley.  I’m the owner of a project management firm.  We help businesses get up and running or realign to new goals.  I’ve been looking for someone to assist with one of our projects.  Would you be interested?”

Julie’s eyes grew wide.  She couldn’t believe her ears.  Was this man offering her a job?  “Sure, sure I’d be interested.”  Julie second-guessed her enthusiasm.  She was desperate to find work, but in this moment she didn’t think it was a good look as a prospective mate or employee.

“Great!  Come by the office tomorrow morning around 9.  I’ll have you interview with H.R. and the manager over the project.”

“Thank you!” Julie was grateful, but she didn’t know Mark.  Why was he helping her?  She wanted to ask, but thought it rude.

“You’re wondering why I mentioned the job?”

Julie was astonished that he read her mind, but glad it was out there.  “Well, yeah.  That and why you asked me out for coffee.”

“I’ve noticed you around.  Saw how you helped the homeless people in the neighborhood and greeted people even though around here most don’t talk to a soul.  I thought you must be a good-hearted person…and…I wanted to meet you.  I didn’t know about your being laid off until you said something just now.”

Julie didn’t know what to say.  Instead she took a bite of strudel while observing Mark glaze his roll with butter and honey.  She was glad she took a chance and excepted the invitation.  So far Mark turned out to be a nice guy and possibly a lead to her future – one way or another.